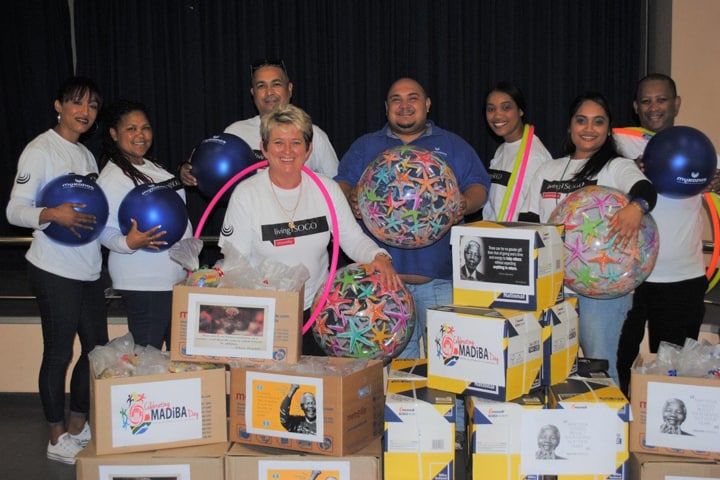 On the 18th of July 2018, Mandela Day was celebrated worldwide and Tsogo Sun’s Mykonos Casino together with Club Mykonos honoured the South African icon through several initiatives around the West Coast.

In Saldanha, staff painted the interior of the Diazville Dolfyntjie Crèche and supplied them with shelves. Thanks to Michelle Pienaar for the wall murals of Dolphins. The casino crew also provided the Saldanha Animal Care Facility with food, kennels and blankets for all the animals.

Over in Vredenburg, a microwave, fridge, crockery, sheets, blankets and sweet treats were donated to the Sisonke Protective Workshop, which enables income generation and job creation among young people with disabilities. A huge thank you to Club Mykonos for the sponsor of the Fridge and Microwave oven. At the Karitas School, which provides education to children with special needs, Mykonos Casino employees handed over 200 items of stationery, along with hotdogs and sweets for the children. They did interactive games with the children, who enjoyed it very much.

The Langebaan Athletics Club was given 19 pairs of running shoes for needy children that participate in its development programs. In addition, the Casino staff supplied Langebaan Animal Care with food, blankets and treats. Plus they took the shelter’s dogs for walks.

Thanks to Bargain Books Langebaan’s generous donation, Mykonos Casino team members were able to give out Afrikaans reading books to the kids at the FDSA soup kitchen and Youth Centre in Velddrif.

With help from Pick ‘n Pay, Langebaan the crew of Mykonos Casino and Club Mykonos, were able to put the ‘hope’ in Hopefield by donating food parcels and household goodies to the residents of the De Geuwels Retirement Village.

Staff members from Mykonos Casino and Club Mykonos travelled nearly 70km away from the Casino site to give food, toys, clothes (thanks to the Langebaan Community) and sweet treats to the 70 children cared for by the Huis van Heerde Child & Youth Care Centre in Moorreesburg.

“All initiatives were driven by Mykonos Casino and Mykonos Resort staff in their personal capacities – embodying the Mykonos culture of supporting our community. We were incredibly proud and honoured to have been a part of this special day, and to bring smiles to so many faces,” says, general manager of Mykonos Casino, Clive Van Groeningen.