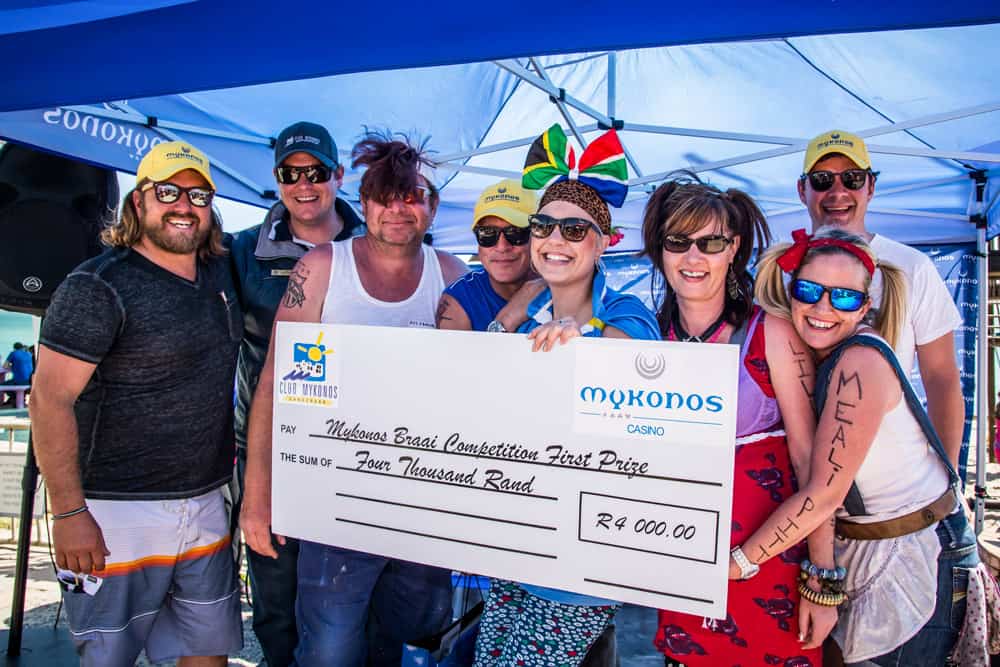 South Africa’s heritage was celebrated with a Braai Competition.

Marc’s Beach Bar at Club Mykonos in Langebaan was the place to be on Monday, 24 September 2018, where South Africa’s heritage was celebrated with a Braai Competition, hosted by Tsogo Sun’s Mykonos Casino.

With a first place prize of R 4,000 up for grabs, the 11 competing teams were determined to show off their best braai skills.

The competition kicked off at 09h00 with the contenders meeting the panel of celebrity judges which included Braai Master Season 4 winner, John Grundlingh; star of the first season of KykNet’s Kokkedoor, Tiaan Langenegger and renowned West Coast chef and owner of the West Coast Chef School and White Sands Restaurant, Fransa Mouton.

While the teams put their impressive skills to the test, families who turned out for the festivities were treated to live music from DJ Wallie, along with entertainment for the kids and stalls serving delicious braai food and drinks.

At 13h00 – after four hours of hard work over the fire – the judges made their decisions based on team spirit, presentation and taste. Madeleyn Inc. and their theme “Die Pitt Familie” took home the title of 2018 Mykonos Braai Competition winners. The Langebaan Country Club’s “The Pink Ladies”, walked away not only with the second place prize, but also  the prize for the best theme while Gerrit Aggenbag and his team the “Gatskop Braaiers” won third place and the prize for the best team spirit.

Mykonos Casino would like to thank all participants for their amazing efforts and for showing off South African culture and heritage spirit!